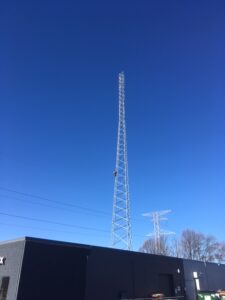 Tower just after it was built November 2020t. Photo by Jim KA9ZYW

Tech & Tower
A huge shout out to Loren Jenz, N9ENR for his contribution to this edition of the Newsletter. Loren agreed to write a couple of articles about antennas and I know you’ll find them very interesting. In his first submission, he has laid out some basic technical
information on which he will build and refer to as this continues. Please let us know how you like this submission and, as always, if you have a question we can answer, or, if you’d like to submit something to share, please let me know.

Antenna Basics – Part 1
I was asked to write a series of articles for this newsletter. After thinking about it for a time, I thought that one of the subjects I could write about would be antennas. But there is a lot of information about antennas already available for the Amateur Radio operator.
So, I thought that maybe a simple non-theoretical, non-mathematical, or basic getting started approach would be the way to go. This approach would show the differing parts of many types of antennas along with short explanations of the functions of the individual
parts of antennas and types of antennas. Once these basics are learned, the reader can then refer to other literature about antennas to dig deeper into the theoretical and mathematical aspects of antennas. Or the reader can simply use the knowledge given here
in these articles to gain a basic understanding that will be useful for selecting and installing antennas.
In this inaugural article, the most important part of the antenna will be explained. That is the part of the antenna where the transmission line coming from a transceiver is connected. The dipole element or driven element will be explained and some of the variations in how the transmission line connects to the dipole will be shown. Also, the radiation pattern and the polarization of a dipole will be discussed.
An antenna is a device or structure that converts electrical signals to radio waves. It also converts radio waves into electrical signals which is the opposite function. In the first example, converting electrical signals into radio waves, the antenna is being used for
transmitting, and in the second example, the antenna is being used for receiving. The
antenna is basically a type of electrical transducer that converts electrical signals into radio
waves or radio waves into electrical signals. The antenna even has the ability to perform
these two functions at the same time. Before explaining antennas, a quick crash course in
transmission lines is needed.
Transmission lines, for the most part, fall into three categories: waveguide, coaxial, and
twinlead. The waveguide type of transmission line is rarely used in Amateur Radio and will
not be discussed here. Of the other two types, coaxial and twinlead, coaxial is the most
common. Coaxial or coax has the signal on the center conductor of the coax cable which
is shielded by the second conductor being tubular in construction and surrounding the
center conductor with an insulating material placed between them. The shield conductor,
which is simply referred to as the shield, is also the return ground for currents in the center
conductor and is the familiar second conductor in most simple electrical circuits involving
two wires. Signals present on a coax cable are referred to as unbalanced because there is
only one signal present on the center conductor.
When there are two signals present, each an exact copy of the other, but one of the
signals is 180 degrees out of phase with the other, then the signals present are referred to
as balanced. This is the third type of transmission line: the twinlead. Here two identical
conductors are held precisely spaced by an insulating material over the entire distance of
the transmission line. When the signal that is present on one wire is in its positive half
cycle, the signal present on the other wire is in its negative half cycle.
The vast majority of modern-day transceivers have an unbalance coaxial connector for
connecting the transmission line that goes to the antenna. A device called a balun can be
used to convert coaxial transmission line to the twinlead transmission line. The balun
works in both directions, so it can also be used to go from twinlead to a coaxial
transmission line. And, even more importantly, the balun can also change the impedance.
More will be discussed about impedance in the paragraphs below.
With this basic understanding of the types of transmission lines, the discussion will now
briefly turn to the simplest form of antenna. The simplest antenna is called a dipole or
dipole element. The basic dipole is an electrical conductor that has a length of what is
called a 1/2 wavelength. This means that the length of the dipole electrical conductor is
going to be determined by the desired operating frequency. The wavelength of a signal is
equal to the distance that the signal travels at the speed of light in only one cycle of the
signal. If the desired operating frequency is 300 MHz, then one cycle of that signal would
be only 1 Meter long or about 39 inches. Therefore, the length of dipole antenna needed
to operate at 300 MHz would be half that 1 Meter or 19 and 1/2 inches or 1 ft and 7-1/2
inches. For simplicity, the “468” formula is used by most amateurs to calculate the length
of the dipole at any frequency in MHz which then gives a result directly in feet:
468 / Frequency in MHz = The length of the dipole in feet.
For the above example: 468 / 300 MHz = 1 ft and 6-3/4 inches.
Please take notice of the shorter distance when the 468 formula is used. The difference is
due to something called the velocity factor which the 468 formula above takes into
account. When an electrical signal travels in an electrical conductor such as the dipole, it
travels slightly slower than the speed of light in a vacuum. The same is true for the
transmission lines discussed above, but for the transmission lines, the insulating material
used to separate the conductors can also have an effect on the velocity factor. This
insulating material in the transmission lines is also referred to as a dielectric.
Figure 1 shows the most basic of all dipoles. It is further cut in half into two 1/4 wavelength
conductors, and a small insulator is placed between the two conductors to keep them
electrically isolated from one another. This type of dipole is often referred to as a center
fed dipole. A 72-ohm unbalanced coax transmission line connects to the center of the
dipole as shown in figure 1. 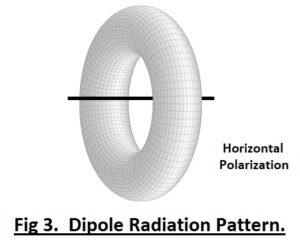 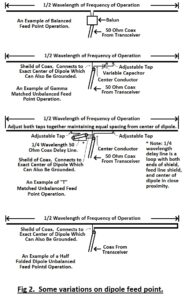 The dark line in Figure 3 is the dipole antenna which is placed horizontally. This is in relation
to the ground. The donut pattern and which is important, represents the directions where
the most intense or strongest part of the radio waves will be radiated from the dipole.
There are still signals radiated in all other directions, but they are weaker signals. So don’t
be confused when seeing this donut in the literature. Saying it again: there are radio waves
radiated in the directions not covered by the donut. The very weakest radio waves radiated
from the dipole are in the two directions out the two ends of the dipole. These signals can
be several tens, hundreds, or even thousands of times weaker than what is radiated in the
direction that is perpendicular to the dipole. In the direction that is perpendicular to the
dipole element, the very strongest radio waves are radiated which is represented by the
largest diameter portion of the donut. A horizontally polarized dipole sitting some distance
greater than 1/4 wavelength above the ground will radiate strongest in two directions. If
the dipole is erected so it’s conductor runs East and West, then it will radiate strongest
North and South. The opposite is true if the conductor runs North and South with the
strongest radiation going to the East and the West. Of course, included in both of these
possibilities is radiation that goes straight up and radiation that goes straight down
towards the ground.
Please refer to figure 4. In this example, the dipole is placed vertically. Again, this is in
relation to the ground. The rules discussed in the paragraph above still apply when it
comes to the directions in relation to the dipole element itself are concerned, but two
things will have changed. First, the polarization of the radio wave has changed. Now the
electrostatic field is fluctuating vertically, and the magnetic field is fluctuating horizontally
which is simple enough. But, the radiation North, East, South, and West changes
dramatically. Now the antenna is radiating in all four directions equally without favoring
two directions at the expense of the other two opposite directions. The antenna is
essentially omni directional. Not omnidirectional in a 3-dimensional sense, but in a 2
dimensional sense which is in a plane that is parallel to the ground.
This leads to the next article in a few months where the discussion will begin with an
improvement to this vertically polarized dipole antenna which is an antenna commonly
referred to as a ground plane antenna. This ground plane antenna is a modification to the
dipole antenna.
Loren Jentz N9ENR.

Trivia
From Last Newsletter: How many Control Operators does the MAARS system have and
do you know who they are?
Answer 7 N9PSN, KA9ZYW, N9FSE, K9ZZZ, N9ASA, KA9WXN & N9LKH
Trivia for next newsletter: Did you know you can use Voice Play Back on the repeater? Do
you know how to use it?

The Workbench
Unfortunately, I don’t have anything prepared at this time. Hopefully, I’ll have some news for
the next newsletter! As some of you may have heard me say on air, I sold one of my FTM 400
XDR radios because I had difficulty pairing it (with the BU-2 Bluetooth chip) with my
motorcycle bluetooth helmet headset. Tom (@ HRO) was kind enough to allow me to come
into the store with my gear to try pairing with the Yaesu FTM 300 to see if the newer radio
worked any better. And, alas, it did! So, my intention was to have this all worked out by now
and be able to report my findings. But life got too busy and while I’ve had the 300 for about
10 days already, it’s still in the box! Once I get it opened and set-up, I’ll use it here in the shack
for a while, then transfer it to the motorcycle. Should be interesting to see what the
differences are. I’m looking forward to making QSO’s via 2 wheels again!

Meetings
There has been some discussion about having a membership meeting now that Covid
restrictions have eased up a bit. More on that as details become available.

Swap Net
MAARS provides a Swap Net every Wednesday night beginning at 9 PM local time.
Thank you for taking the time to read this newsletter about our organization! Please help it along by
asking questions, submitting articles and thoughts so we can all grow together!
KB9JMH@513repeater.org